The building is inspired by famous beerhouses in München, the capital of Bavaria. The Neo-gothing building, with a façade somberly decorated, has in its center a ronde-bosse sculpture, placed in a niche at the base of the roof.

“The sculptor portrayed a German Innkeeper dressed in the fashion of the eighteenth century, holding a pint in honor of those who enter the premises. By the noble attire of the face [..], with the graceful gestures of the hands, the artist made a work inspired by the Italian Renaissance statuary, but managed to fit naturally into the whole Gothic decoration of the building facade. As in so many other cases of the sculptures that adorn buildings, the name of the author remained anonymous.” 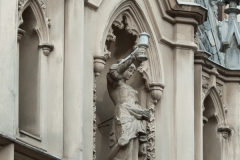 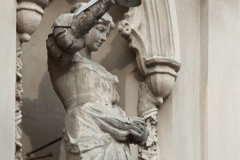 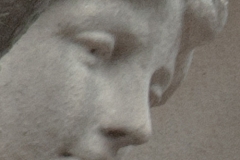 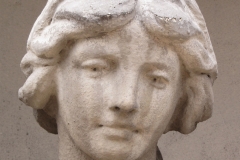 Hypothesis: in 1899, aged 43, after studies in Paris and Roma (1882-1887), after he conquered the enthusiasm of Barbu-Stefanescu Delavrancea (1888), after he built the allegorical statues the Commerce and Industry on the façade of the National Bank (1889) and the allegorical statues Mechanics and Mercury on the façade of the Post Office Palace (1899), married to Eugenia, the daughter of Ion Căbăşanu, Ştefan Ionescu Valbudea (1856-1918), one of the major personalities of the Romanian sculpture, could be the author of this work. 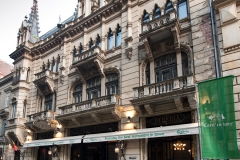 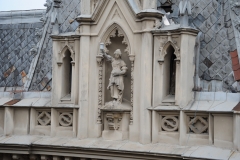 Adding to the rich indoor decorations, at the bottom of the wooden stairs leading to the balcony on the right side of the central area of the beerhouse, we have a small wooden statue, made in 1924, of old Ghiţă, the famous cellarman from the beginning of Caru’ cu Bere’s existence. 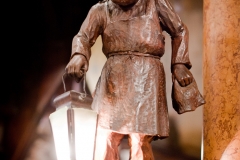 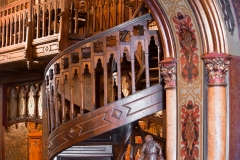 In the central area, there is the bronze bust of the founder Nicolae MIRCEA, made in 1935 by the sculptor Ion Stanea, installed in 2006, when the rehabilitation works were made to restore the establishment’s history. 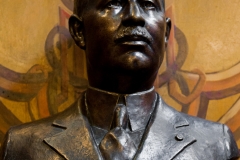 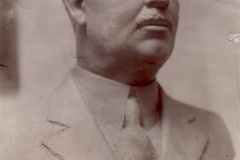 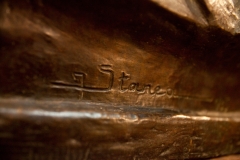