On March 10, 1898, based on the project prepared by the architect Zigfried KOFSINSKY, the Department of the Technical Works from Bucharest issued the Building Permit no. 12 of March 10, 1898 for Mr. N. MIRCEA.The new building opened in June 1899. The building unfolds as follows: basement – cellars for wine and beer barrels; high ground floor – hall-like restaurant; two floors – housing for the owner and employees; and a wide attic. 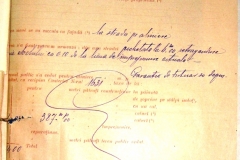 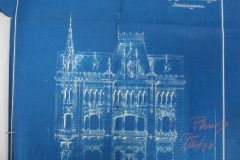 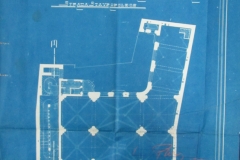 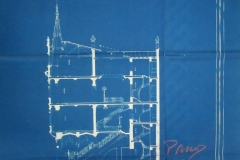 During the age, the building was noticed by the asymmetric façade, marked by a console tower with the spire roof and Gothic decorative details (pinnacles, fleurons, frames, traceries, clubs arches) graded vertically and crowned with a central recess from the roof where it is located the emblematic statue of an innkeeper. With all these features, the architectural style of the building is of „German Romanticism”. 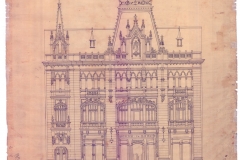 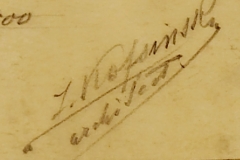 Later, to build Caru’ cu Bere up to Lipscani Str., Nicolae MIRCEA sought the help of the same architect, Zigfried KOFSINSKY.
The drawings conceived in 1924 proposed an organization similar to the one from Stavropoleos, with the same elements both indoor and outdoor for the new façade in Lipscani Str. (the drawings were exhibited at the Official Hall of Architecture and Decoration Art, 1929). 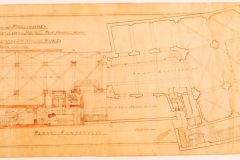 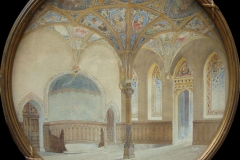 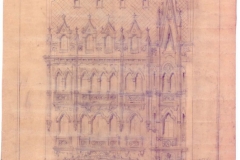 Following the organization of the new spaces from Lipscani, the basement of the Stavropoleos building was transformed in wine cellar. It was decorated to match the overall style and was meant to widen the central area of the hall, being equipped with a wide skylight and stained glass to match the beerhouse. 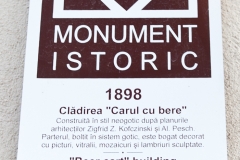 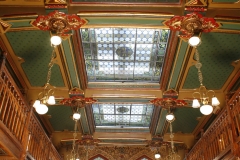